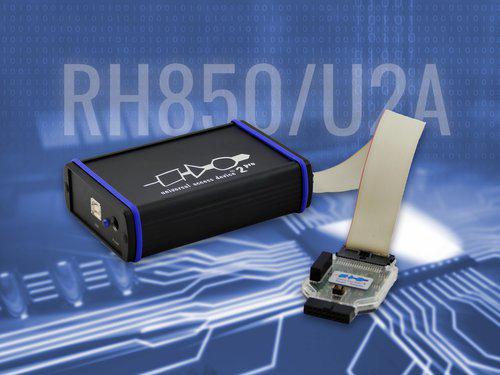 The high-performance microcontroller, designed as a cross-domain controller and equipped with up to 16 MByte flash memory and 3.6 MByte SRAM, allows the integration of multiple applications into a single chip. At the same time, it meets the highest demands in terms of functional safety and cyber security. With up to four cores, each clocked at 400 MHz and with the option to operate in lock-step mode, the RH850/U2A offers a top-level ratio of performance vs. power consumption. For demanding timer tasks and the extensive signal processing usually required in automotive applications, the chip also features a Generic Timer Module (GTM) developed by Bosch.

The UDE's particularly user-friendly and intuitive user interface significantly facilitates application development for these MCUs. For example, the UDE enables control of all cores for debugging, testing and in-depth system analysis within one single debugger instance. Thus, there is no need to open separate debuggers for the individual cores of the RH850/U2A.

Depending on the software architecture and application partitioning, the UDE allows developers to control the cores of the RH850/U2A using traditional run-mode debugging, i.e., breakpoints or single-stepping, either all together, in groups, or individually. All cores in such a run-control group can be started and stopped almost synchronously. This guarantees always a consistent state of the respective application during debugging. For the first time, it is also possible to define multiple groups for synchronizing the cores, for example with two cores per group. With the help of this function, even application clusters can be directly mapped within the debug environment.

Configuration dialogs within UDE of course enable the full utilization of the extensive trigger options offered by the RH850/U2A's on-chip debug system. Developers can, for example, realize their own breakpoints based on complex conditions and even on state machines.

Programming of the up to 16 MByte internal flash ROM is handled by the UDE MemTool which is an integral part of UDE. In addition to its standard functionality, the versatile tool also offers special support for the RH850/U2A-specific configuration and security settings as well as for flash sector protection.