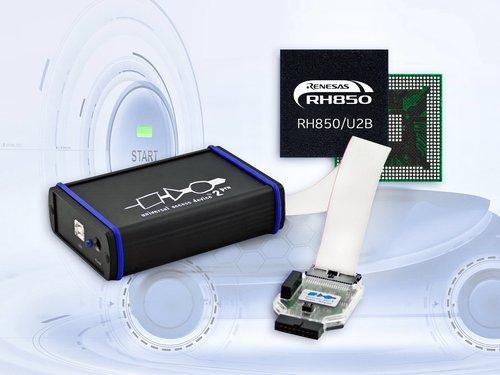 Focused on zone control and cross-domain applications, the RH850/U2B MCU combines key functions from the RH850/E2x series for powertrain and from the RH850/C1M-Ax series for HEV/EV motor control. With additional accelerator IP modules and enhanced security features, the RH850/U2B is ready to perform multiple ECU functions on a single, consolidated ECU, meeting both the high safety and security requirements as well as the real-time demands of today's and tomorrow's automotive applications. The RH850/U2B implements a maximum of eight cores clocked at up to 400 MHz, some of which can also operate in lockstep mode. In addition, a Generic Timer Module (GTM) is integrated. The GTM provides dedicated functions especially for demanding timer tasks and automotive applications, where data from multiple inputs have to be captured and numerous different signals are generated. To accelerate complex mathematical calculations, a RISC-V-based co-processor has also been implemented on the RH850/U2B, providing support for 512-bit wide vector instructions.

The latest version of the Universal Debug Engine® provides uncompromised multi-core debugging for the RH850/U2B. For example, the UDE enables control of cores for debugging, testing and in-depth system analysis within one debugger instance. Thus, there is no need to open separate debugger instances for the individual cores of the RH850/U2B. In particular, special attention was paid to the user-friendliness and efficient manageability of UDE. This is especially reflected in the user interface design, which can be easily adapted to the respective needs of the developer, and which supports multi-screen operation. Freely configurable perspectives allow multiple views to be defined within a debugger session and to switch between them in order to focus on a specific debugging task. These are particularly useful for multi-core debugging, when, for example, the developer wants to observe and analyze the behavior of a core in detail.

For debugging multi-core applications and to support different software partitioning, UDE gives the user the choice of different synchronization modes for traditional run-mode debugging, i.e. for breakpoints or single-step operations. This means that the cores of the RH850/U2B can be controlled either all together, in groups, or just individually. All cores in such a run-control group can be started and stopped almost synchronously. In addition, multiple groups can be defined for synchronizing the cores, for example with two cores per group. This feature can even be used to directly map application clusters within the debug environment.

Specifically, for the development of programs for the GTM's Multi-Channel Sequencers (MCS), the UDE now offers breakpoints and single-step operation. It takes advantage of the new hardware functions that have found their way into the debug system of the GTM v4.1. Applications that use the security functions of the RH850/U2B are also supported by the UDE in a dedicated manner. Thus, in addition to the main cores, the integrated ICU-MH security module can also be debugged. Both the GTM and the ICU-MH can be synchronized with the main cores using the UDE run control groups.

The programming of the up to 32 MByte dual-banked flash memory is done via the integrated UDE MemTool. The tool not only features high standard functionality, but it also supports programming of the flash memory when it is operated in double-map mode. Later in the field, this mode is needed to perform OTA (Over-The-Air) software updates. In addition, the UDE MemTool also offers special support for the RH850/U2B-specific configuration and security settings as well as for flash sector protection.