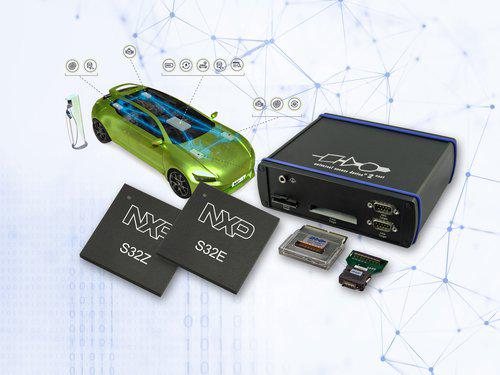 With the new version UDE 2022 of the Universal Debug Engine®, PLS Programmierbare Logik & Systeme introduces the multicore debug and trace support for the new NXP® Semiconductors S32Z and S32E real-time processors. The solution will be demonstrated at embedded world 2022 in Hall 4, Booth 4‑310.

The S32Z2 and S32E2 series devices are manufactured in 16 nm technology and combine eight Arm® Cortex®-R52 cores, running at 600 MHz to 1 GHz, with Cortex-M33 cores for special purposes like system management and communications. For advanced timer functions to be realized in real-time applications, a clustered Generic Timer IP Module (GTM v4.1) is implemented. A network-on-chip (NoC) ensures fast communication between the main core clusters and other functional blocks. Depending on the device, up to 64 MB integrated flash memory is available. The non-volatile memory can be extended with external QuadSPI NOR, eMMC or SDHC NAND memories, as well as with LPDDR4 flash memory supporting large applications and data.

With its user-friendly and intuitive UDE debugger platform, PLS gives developers easy access to the S32Z2 and S32E2 devices. The main Cortex-R52 processor cores, the Cortex-M33 system management and communication cores as well as the GTM are all visible and can be controlled within one common debugger instance. There is no need to open separate debugger instances for the different core architectures. The UDE allows debugging of C/C++as well as assembly code for the Cortex-based cores including the Arm and Thumb-2 instruction set. Debugging of the Multi Channel Sequencer (MCS) of the GTM can be conducted on assembler as well as C code level. In which UDE supports GTM-C compilers from various compiler vendors.

The MemTool add-on, which is an integral component of UDE, provides functions that enable simple and secure programming of the integrated flash memory as well as the external QuadSPI NOR, eMMC and SDHC NAND memories and offers also support for OCOTP (On Chip One-Time Programming).

By using the multicore run-control management, UDE allows developers to control the cores of the S32Z2 and S32E2 processors using traditional run-mode debugging, i.e. with breakpoints or single-stepping, either all together, in groups, or individually. All cores in such a run-control group can be started and stopped almost synchronously. This helps to keep a consistent state of the respective application during debugging. Multicore breakpoints also simplify the debugging of complex applications, especially in shared code. A multicore breakpoint is effective, no matter which core is currently executing the specific code.

With UDE 2022, the debugging capabilities for MCS channel code of the GTM have been extended to include breakpoints and single stepping. These features relay on new hardware debug functions that are available with the GTM v4.1, which is integrated in the NXP S32Z and S32E real-time processors.

For non-invasive debugging and runtime analyses of multicore applications, UDE provides extensive functions based on recorded trace information from the device’s Arm CoreSight trace system. This allows both the program flow and data transfers to be recorded. UDE provides comprehensive configuration options for the ETMv4 of the Cortex-R52 cores as well as the ETM-M33 of the Cortex-M33 cores in order to filter for example the trace data to be recorded. In addition to the core trace, the transactions via the NoC can also be observed by the trace system and investigated with UDE. For this, too, the UDE offers wide-ranging configuration options for filtering the data. The trace support for the GTM, including program trace for the MCS channel programs as well trace of GTM signals, is in preparation.

For recording the trace data, either the UAD2next or the UAD3+ from the PLS’ Universal Access Device family can be used. To store trace data, the UAD2next features 512 MB of trace memory and the UAD3+ up to 8 GB. The fast download of the trace data from the chip towards the UDE is done via the High Speed Serial Trace Port (HSSTP) of the S32Z2 and S32E2 processors.

“Thanks to the long-standing cooperation with NXP and as NXP Gold Partner, PLS can offer a high-quality debugging, system analysis and test tool in time for the launch of the NXP S32Z and S32E real-time processors. Thus, PLS continues offering developers comprehensive and reliable support for their application development," says Jens Braunes, Product Marketing Manager at PLS.

“Through the engagement with PLS, one of the leading tool providers for S32Z2 and S32E real-time processors, NXP offers embedded application developers a solution that takes advantage of the system features, and helps accelerate their time to market”, said Simona-Sorina Costinescu, Software Manager for Automotive Processing Business Line at NXP