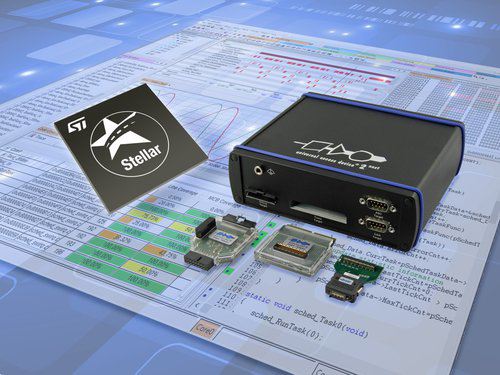 The Stellar SR6 P series addresses the next generation of drivetrain, electrification and domain-oriented systems, offering a new level of real-time performance, safety and determinism. Applications for the Stellar SR6 G series range from high-end body integration to zone-oriented vehicle architectures. Hence, the devices combine high performance and energy efficiency with comprehensive connectivity and highest security. Up to six Arm® Cortex®-R52 cores, some of which operate in lock-step or split-lock mode, and up to 20 MByte of embedded phase-change memory (PCM) guarantee multicore performance for real-time applications at the highest level in both model series. Stellar SR6’s innovative dual-image storage enables efficient Over-The-Air (OTA) reprogramming with major savings in memory size through an ST innovation that supports configuring the PCM cell structure to double the memory size during OTA updates.

The UDE, which has been continuously enhanced over the long-standing involvement of PLS in the ST Partner Program, provides developers with full debug and trace functions for debugging, testing and system analysis for both device series. True multi-core debugging in a user-friendly way is possible in a single debug session and within a single shared debugger instance. The UDE Multi-Core Run Control enables synchronization of both the Cortex®-R52 application cores and the Cortex®-M4 based accelerator cores of the devices during debugging. Optionally, all cores or a selected group of cores can be started and stopped synchronously.

Multi-core breakpoints, which can be used in shared code, simplify debugging of complex applications. Such a breakpoint is always effective and completely independent of which core is currently executing the respective code. In addition to support for the actual application cores, the UDE also allows debugging of the hardware security module, which is also integrated, as well as the GTM4, which provides extensive timed-IO functions.

For comprehensive and non-invasive runtime analysis, the UDE leverages on the extensive trace capabilities of the CoreSight™ debug and trace system of the Cortex®-R52 and -M4 cores. In addition, data transfers via the on-chip network can be observed. The UDE also provides extensive trace functions for the GTM4. They can be used to observe both the execution of code in the GTM as well as GTM-specific signals with high temporal resolution.

For fast and reliable debug communication between the ST devices and the UDE via Serial Wire Debug (SWD), Developers can choose between the UAD2pro, UAD2next or UAD3+ devices of the Universal Access Device family from PLS. For recording large amounts of trace data off the chip both the UAD2next and the UAD3+ can be used. 512 MB of memory is available in the UAD2next and up to 8 GB of trace memory in the UAD3+. The fast transfer of the trace data is performed in each case via the High Speed Serial Trace Port (HSSTP) of the Stellar SR6 G or SR6 P devices.